While we mostly focus on female fertility, in this post we’re going to take a look at male reproductive health and, in particular, sperm production. In fact, knowing the sperm life cycle is actually really important for also understanding the female fertile window, and for understanding fertility more widely. Read on to find out more...

A crucial, and often difficult, difference between female and male fertility is time. While female fertility is limited to a number of years, men are fertile for most of their adult life. One of the reasons for this is that women are born with all of their egg cells and the quality of these decreases with age. On the other hand, sperm are continuously produced, with approximately 100 million made each day! So how does sperm production work? What is the process? How long does it take? And what does this mean for men wanting to improve their sperm sample quality?

Semen is another word for ejaculate - the fluid which is expelled from the penis during sexual climax. But what is semen made of? Firstly, ejaculate is made up of two components: The sperm, which comes from the testicles, and the seminal fluid, which is produced in other organs, including the prostate. These two components are mixed during ejaculation, creating semen. Today we’ll focus on sperm production in the testicles, a process scientifically called spermatogenesis.

Although the testicles appear externally to be round structures, they’re actually made up of lots of tightly coiled tubules as you can see in the diagram below. Within the walls of these tubules, the sperm cells are produced and then matured. 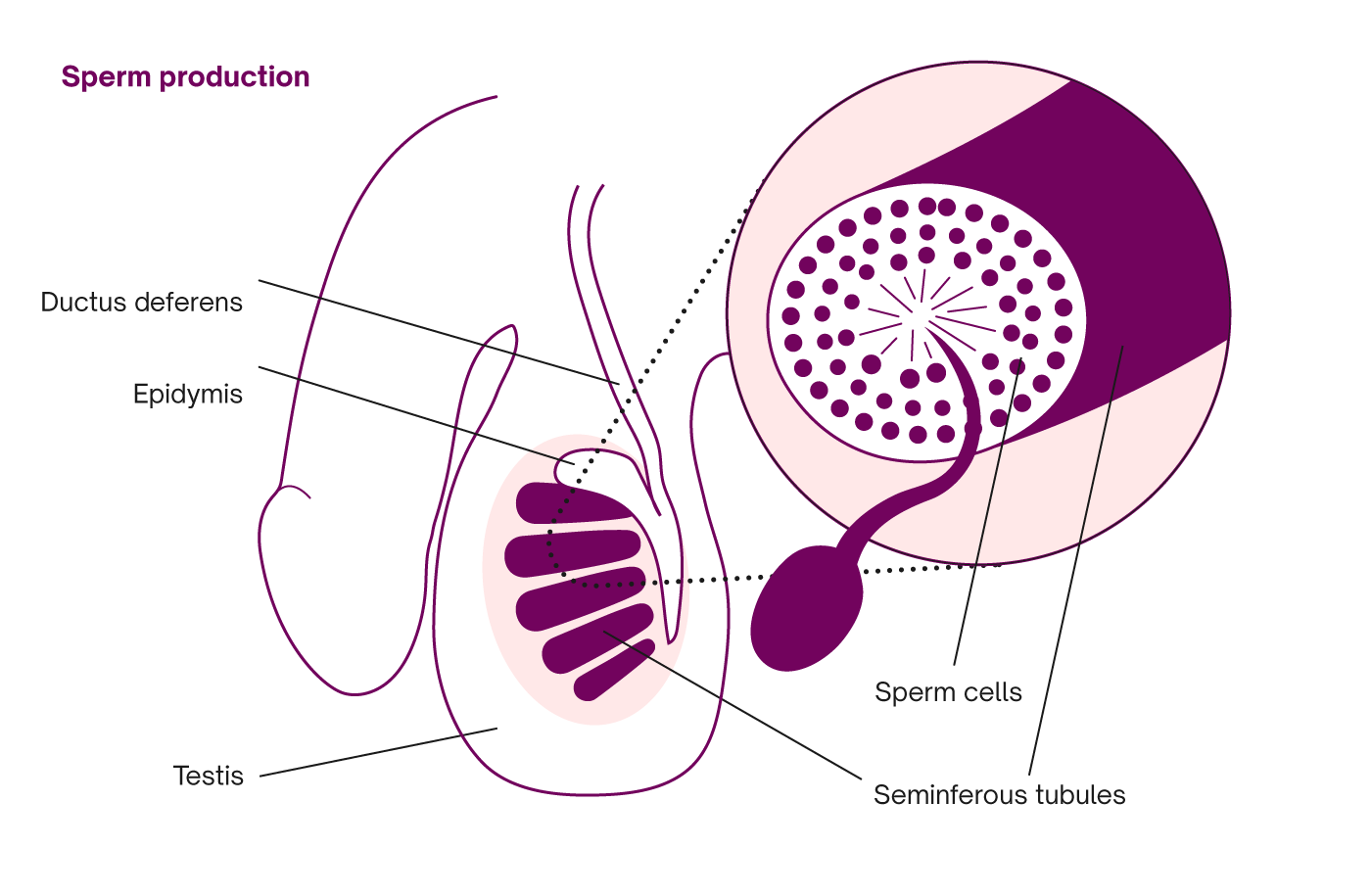 Spermatogenesis (sperm cell production) takes on average 64 days from start to finish, but this varies between individuals. Immature sperm cells will divide multiple times within the testes resulting in the production of the tadpoles like cells we recognise as sperm.

This immature but structurally complete sperm cell consists of a head, midpiece, and tail. The head contains the genetic information (DNA) of the male, the midpiece contains cells to produce energy for swimming and the tail enables swimming once the sperm has matured and is ejaculated. Finally, the sperm passes into the epididymis, which acts as a sort of holding bay, where the sperm can continue to mature and gain the ability to swim. It’s here that they are also fine-tuned for the possibility of meeting the female egg cell in the future.

How to improve sperm quality

So having learned about the process of sperm production, how is this information useful for couples wanting to conceive? Well firstly, this process takes two and half to three months. That means that if you are wanting to improve the quality of your ejaculate, you’ll need to make dietary and lifestyle changes in advance of when you want to make the most of the ejaculated sample!

Eating a balanced diet and exercising regularly can help to improve sperm quality. For many men, simply eating a healthy range of foods will provide the right nutrients to make sure sperm production is optimal. Although many millions of sperm are produced each day, the majority of these, once ejaculated into the vagina during sex, will not reach the egg. So while it may sound like a lot of sperm cells are being produced, in reality, these have a quite few hurdles to overcome on their epic journey through the female reproductive tract.

Remember that just like the varying pattern of the female menstrual cycle, semen quality in men is individualised and may change from month to month. It is quite normal for the quality of one man's ejaculate to increase and decrease over time, but maintaining a healthy diet and lifestyle will help set good foundations for sperm production.

If you have not been able to conceive after twelve months of unprotected sex, talk to your healthcare professional and they can begin looking into whether there may be some issues with sperm quality.

We hope you’ve enjoyed learning all about sperm production. Remember, the fertility journey is different for every couple. While both male and female fertility have roles to play, women are only fertile for six days in any menstrual cycle.

Natural Cycles is a method combining an app and a thermometer, that helps women predict and confirm ovulation, meaning couples can find that fertile window and plan pregnancy with precision. Are you ready to learn more about your fertility?

START MY JOURNEY
How does it work?

Are you thinking about saying goodbye to hormones and starting fresh with natural birth control? Check out our list of natural contraception, from traditional family planning to birth control apps - we’ll unpack the effectiveness of each method plus give an overview of how they work. Read on to find out more about natural birth control.

HPV stands for human papillomavirus. This very common type of sexually transmitted infection is an important one to learn about for several reasons. Read on to find out more about what causes HPV, just how common HPV is, how to prevent HPV, and more…

Join us as we take a look back at our memorable moments from the year! From vagina facts to talking about different types of sex, there’s been a lot happening on the CycleMatters blog. Get cozy, grab a cup of hot chocolate, and let’s wrap this year up together…