Another word for sex drive, libido describes a person’s desire for sexual activity - there is no numeric measurement for libido, but it’s usually referred to as being low or high. There are many things that can affect sex drive from biological reasons to social or psychological factors. In this post, we’re going to look at the main sex hormones, how they impact libido, the difference in male and female sex hormones, and how libido changes throughout the menstrual cycle.

The main sex hormones are estrogen, progesterone and testosterone. While we associate progesterone and estrogen with the menstrual cycle, and testosterone with sperm production, all three of these hormones are present to some extent in both male and female bodies. Now, let’s take a look at the main sex hormones and unpack their functions and how they influence both male and female sex drive.

This article is also available in Spanish

It’s important to note that there is no ‘normal’ when it comes to sex drive, everyone is different and our bodies behave in different ways - and our sex drives are no exception! An increased libido can be caused by a number of things. In women, there are points in the menstrual cycle when sex drive is typically considered to be higher. Usually, in the days approaching ovulation when we are most fertile, our sex drive is also highest.

Typically, our sex drive is highest at points in the cycle when progesterone is low and estrogen levels are high. Progesterone can make us feel bloated, sluggish, and is associated with the undesirable symptoms of PMS. Estrogen, on the other hand, can be energizing, gives a healthy glow to skin, and a boost to the libido.

As well as affecting our sex drives, estrogen has a number of functions in the female body including:

Testosterone is also present in small amounts in the female body, although not directly linked to sex drive, it has a key role in repairing and maintaining reproductive tissues and bone mass.

Estradiol, a form of estrogen is also present in the male body and is linked to libido, erectile function, and sperm production. Progesterone also plays a key role in regulating estrogen and is also required to make testosterone.

There are so many factors that can impact libido, these can be physical, psychological, or caused by external factors or lifestyle. Sex drive typically decreases after menopause in women, but also generally declines in men as they age as well.

Also impacting libido, increased stress, anxiety, or mental health problems can decrease the desire for sex. Unfortunately, many medications used to treat anxiety or depression can also cause a slump in sex drive. Drug use, smoking, and alcohol also affect sex drive negatively.

We are all prone to notice changes in our sex drive throughout our lifetimes. Generally, periods when you have a low libido shouldn’t be a cause for concern, but if you notice a change in your sex drive or find a lack of libido is impacting your well-being you should speak to your doctor. In some cases therapy can be used to combat stress, which in turn can combat low libido or erectile dysfunction in men.

While it might seem like it’s is everywhere, from the saucy song lyrics playing on the radio to the sexed-up yogurt commercials on TV, recent studies have shown that our interest in actually having sex is declining over time. Take research into this topic with a pinch of salt though, as societal pressures and social norms mean those asked about sex might not always be entirely truthful, contributing further to false perceptions of what a healthy desire for sex might be.

Why should I track my sex drive?

Sex drive is just one of the factors that changes throughout the menstrual cycle. Tracking your libido can give you insights into the unique pattern of your cycle. Alongside cervical mucus, PMS symptoms, and emotions, sex drive is just one more feature you can track with Natural Cycles, the first and only birth control app to be FDA cleared in the US.

Natural Cycles uses temperature data to find and predict ovulation. The algorithm uses this information to calculate your fertility and gives you a status for the day so you know whether or not you can get pregnant today. A non-hormonal method of contraception, Natural Cycles has over 1.5 million registered users worldwide. Why not find out if it could be an option for you?

While it’s not often talked about, having a lower sex drive is actually pretty common and in many cases, it’s perfectly healthy! We’ve put together this quick guide to answer some common questions about low sex drive. Read on to find out some causes of low sex drive, tips for getting pregnant with low sex drive, and more…

5 Ways to Have Sex Without Penetration

If you’re looking for some ways to mix things up between the sheets then look no further than these five ways to have sex without penetration. Non-penetrative sex has many benefits including prioritizing pleasure and helping us get to know our bodies better, plus abstaining from intercourse is a helpful option on fertile days for those of us who are preventing pregnancy naturally… 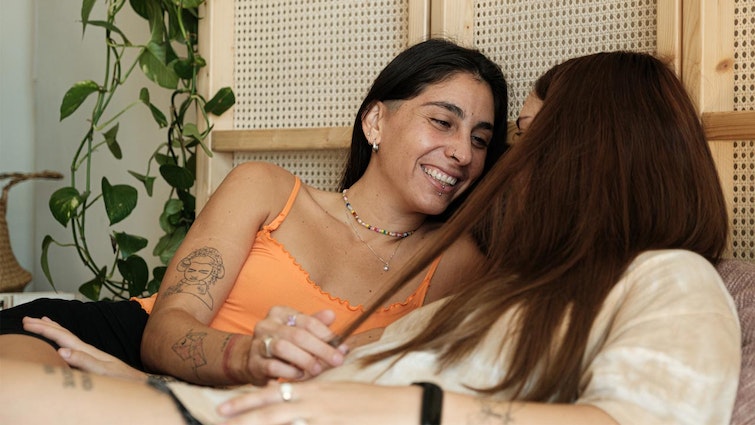 What is Consent, and Why is it Important?

We’ve been talking more and more about sexual consent in recent years, but why is this topic so important, and what exactly is consent? In this article, we’re going to cover just that! We’ll also touch on different types of consent, and how setting boundaries can benefit you and your relationship. Read on to find out more...